Runner of the Month: Krista DuChene

With another successful Tamarack Ottawa Race Weekend behind us and summer within reach, we’re taking some time to reflect on running.

At this year’s the Health and Fitness Expo, Canadian elite runner Krista DuChene gave an excellent pre-race talk with tips for those preparing to run the Scotiabank Ottawa Marathon. This month we caught up with her to talk about how the race went and to get some more summer running tips.

“The Scotiabank Ottawa Marathon was a second chance for me after a disappointing 2019 Boston Marathon with warm temperatures and high humidity,” DuChene explains. “I expected the conditions to be the same in Ottawa so I prepared by completing some heat acclimation training. My fitness was decent, but it was my ability to handle the conditions that allowed me to place second Canadian and seventh overall.” 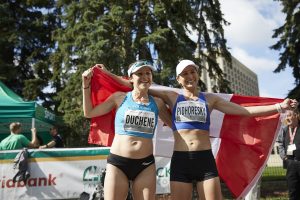 Finishing on a good note brought home what DuChene talked about at the expo: the importance of preparing and knowing what your body needs on course, and that means sticking to your nutrition plan and staying cool on course (shout out to the sponges on the route!).

“I felt really driven and wanted to finish my spring season on a good note. I’m so glad I gave myself a second chance!” says DuChene.

Living and running in Ottawa, it can be easy to forget how lucky we are here in the nation’s capital, but it doesn’t fly over the heads of the elites.

“The thing that stands out to me about Ottawa are my easy pre-race runs along the canal and Wellington Street with the parliament buildings and the Terry Fox statue,” says DuChene, who calls Brantford home. “There is something special about running in your nation’s capital where heroes like Terry Fox are in view.”

But it isn’t only the scenery that brings elites back to Ottawa, it’s the whole vibe of Tamarack Ottawa Race Weekend – from the excitement of the 10K to the marathon course layout, the volunteers and cheers – and of course the stellar competition.

“I was so pleased to share the Canadian flag with top Canadian Dayna Pidhoresky after we finished. Ottawa is a beautiful city that nourishes growth and pride in our incredible country,” says DuChene.

2019 was a special year for the Scotiabank Ottawa Marathon because it is the first time that it was part of the Abbott World Marathon Majors Wanda Age Group World Rankings. DuChene’s finish time of 2:38:46 – in both Ottawa and Toronto – has her tied in first place for her age category in the world – meaning she will qualify to participate in the world championship at the 2020 Virgin Money London Marathon.

“This is definitely very special, particularly because my points have been accumulated through Canada’s two most epic marathons. I could go anywhere in the world to race but can also stay on home soil to produce excellent results,” says DuChene.

Hot days lie ahead and it’s important to let your body acclimatize to a new running challenge. DuChene herself took some time off after running two spring marathons but is now getting back in to 5Ks and 200m sprints before taking on new marathons in the fall.

“Ease yourself into new conditions, particularly in Ontario where the weather can drastically change,” DuChene suggests.  “Rather than focus on your watch, go by effort so that you don’t overexert yourself on those extreme weather days.”

And with the nice weather it’s a good time to take advantage and take a rest.

“In the summer I enjoy a break from our busy routine of extra-curricular activities and coaching,” says DuChene. “We spend a lot of time at our cabin with my sister and her family. It’s very relaxing and by the time summer is over, I am ready and recovered to get back to the busy routine again!”

For those thinking about getting outside of Ottawa to do some running, DuChene has a few recommendations.

“I love running on the various trails in and around the City of Brantford and Brant County, particularly along the Grand River. I also quite enjoy having coffee and running with friends in Paris, Ontario as it lives up to its name of the prettiest town in Canada.”