The September 6th event in ‘Run Ottawa’s Saturday 5K Run Series,’ presented by “Sports 4” was a wet affair but definitely not a washout as thirty-eight runners showed up ready to ‘get it done’ under moody skies.

There were lots of familiar faces, as well as a few new ones, out to the September edition of the free event, which is held at the Central Experimental Farm on the first Saturday of the month between April and December. The usual wide range of ages were also represented and, despite the damp, a fun and festive mood prevailed as runners stuck around to chat and pick-up some prizes after the finish.

Runners check out the prize table after the race (photo: Ian Hunter)

Many thanks to Sarah Muldoon of ‘Sports 4’ who came out to distribute some merchandise prizes from the store (and a much valued second tent to provide shelter) along with Run Ottawa’s Al Macartney who acted as course marshall. Volunteers were Josh Goutte and Shiraz Mawani who helped with set up and take down and shortened the clean-up time considerably. Special thanks to Ian Hunter who took photographs, including the ones here, and ran the 5K.

The next event Saturday 5K is on October 5th at the same location (Central Experimental Farm), and as always, is free to participate.

Results from the September 6th event. 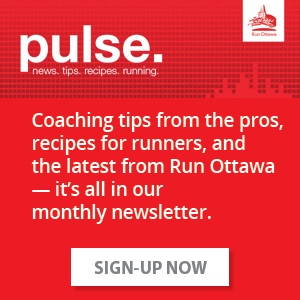